Lieutenant James is a Confederate officer stationed in St. Louis. On the evening of May 31st, James’s men arrested a drunken Seamus and a belligerent Sterling near the docks. Sterling was questioned regarding his lightning gun and goggles, and despite explaining all the advanced scientific principles involved, Lt. James remained unimpressed. Luckily, he was convinced Stirling wasn’t a spy and released the scientist with just a $10 fine for drunkenness and a goose egg on his forehead.

However, Sterling is certain Lt. James wants him to track down and dispatch the Burning Man. Of course, the officer couldn’t say as much in an official capacity, but the look of horror in Lt. James’s eyes when the Burning Man was mentioned spoke volumes. Plus he gave Sterling all his gadgets back; what else for but to rid St. Louis of that terrible shade?

And if Sterling tells people he’s acting at the direct behest of Lt. James… well, that’s what James really wanted. And since it’s for the common good, it just makes everything better for all concerned. 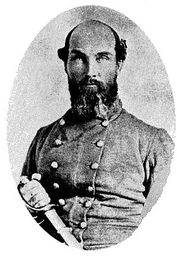