A rotund barber and possibly only survivor from New Jerusalem, CO.

Oliver Pickman is the former barber of New Jerusalem, CO. As a hobby, he dabbles in acquiring ancient lore and occult knowledge.

He assisted the posse in defeating the mysterious “masters” from another dimension before collapsing into a sleep and awakening with no memory of New Jerusalem’s troubles or the posse. Before it was destroyed by Brother Allen, he was the owner of an old book entitled De Vermis Mysteriis. 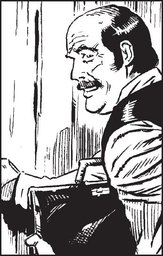