Sterling Simms, Titan of the West

Sterling Simms grew up in New Rochelle, NY. He was a bright, curious boy, but after his father died when Sterling was 12, there was no money for college. Instead, Sterling went to work at the Western Union telegraph office when he was 16.

He started as a messenger boy, but did his job well and learned as much about the telegraph system as he could, and he eventually became a telegraph operator. Still, Sterling constantly searched for his moment—some brilliant invention or opportunity that would make him wealthy. Deep down, Sterling knew he was destined for greatness.

Eventually, he went to the midnight shift. Watching the almost-always-quiet lines, he worked on his own experiments with electromagnetism and ghost rock (all near universal failures), read as many science books as he could get his hands on (stealing them if necessary), and writing long letters to government officials and wealthy men, pleading for funding for his experiments.

At twenty-five and still living hand-to-mouth, Sterling started to fear that he would would end up a failure, his innate greatness never appreciated. Then a well-dressed gentleman named John Gray began coming to the telegraph office late at night to send and pick up messages from a “John White” in Denver, CO. The messages were supposedly about the prices of cattle, but the numbers seemed random. Even Sterling knew you couldn’t sell a Holstein steer for $3.16 a head.

He decided the numbers were a code, and one night after receiving a message from John White, he sat trying to decipher it with various alphanumeric cyphers. Then the telegraph machine started beeping. The sending stations identification number, #3355, wasn’t any listed station, and the message was addressed directly to Sterling. It said, KING JAMES BIBLE.

Working for hours, Sterling figured out the numbers represented book, chapter, verse, and word within each verse. The deciphered message was about something valuable near Coffin Rock. He telegraphed back to #3355, asking what he should do with the information. The message came back, SIEZE YOUR MOMENT and the basic laws needed for the arcana detector goggles.

When John Grey came in the next night, Sterling gave him a fake coded message that read, THEY ARE WATCHING ME. NO MORE MESSAGES. I WILL CONTACT YOU WHEN SAFE. Next, he sent an identical message to John White from John Grey. Taking all the money he’d saved, Sterling left New Rochelle with a brief note to his mother saying he was going to seek his fortune. Only stopping when he reached St. Louis, he built the arcana detector goggles, gathered other provisions, and prepared for his expedition.

Sterling has convinced himself that #3355 is a generous benefactor—no doubt possessing a scientific, forward-thinking mind like Sterling himself—who has recognized Sterling’s potential. Most likely, John Grey and John White stole something from him, and he has entrusted Sterling to get it back. Exactly why he’s chosen to stay anonymous is a bit of a mystery, but surely, all will be explained in due time.

Of course, it’s only a matter of time before John Grey and John White see through the ruse. And Sterling has been having frightful dreams about John Grey chasing him ever since he left New Rochelle. But that’s just a nervous disposition brought on by travel and St. Louis’ too-warm climate. Right?

Sterling Simms, Titan of the West 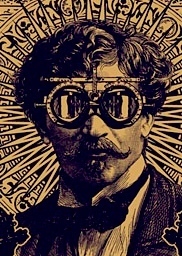